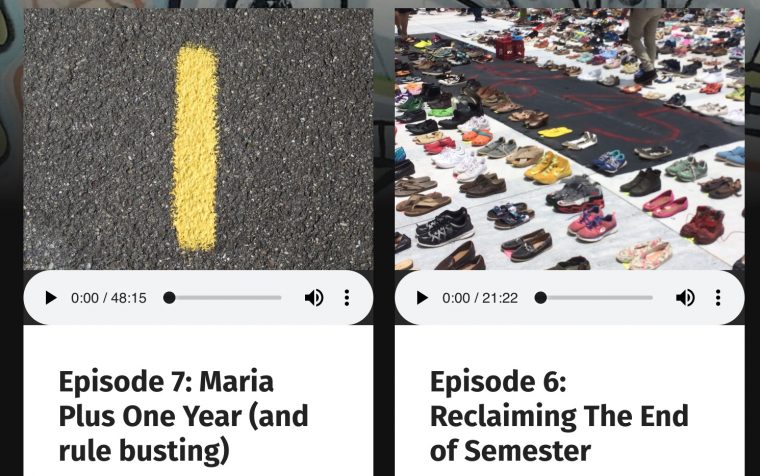 And it’s all worth it. Especially as Antonio Vantaggiato stay in touch through the interwebs.

As he reminded me in September, it was a year since we started our plan to share his and students in Puerto Rico stories of living through Hurricane Maria, and the idea to send support via postcards.

On our very popular web site (in our minds), the PR Connection, you can see Episode 6, Reclaiming the End of the Semester was recorded in May, 2018 but not published until October. Our process is very … well meticulous? Actually we both got caught up in stuff over the summer.

That stuff was covered in Episode 7: Maria Plus One Year (and rule busting), published maybe a week later, but recorded in October 2018. We decided we could bust the 20 minute rule (as if anyone cares) as it was important to talk about it being a year later, and Antonio sharing the stories of his summer travel as well as how his Fundamentos de Informática (INF103) students were working on digital stories of their own Hurricane Experience.

I enjoy seeing the glimpse of life on the Universidad del Sagrado Corazón campus via Antonio’s photos and the University’s Instagram.

Over in his class site, with not any fanfare, Antonio continues to promote and lead the use of new media tools, blog syndication, and more. People n twitter are raving about the “novel” idea of course trailers?

Antonio has that covered.

So we better step it up, and get one more recorded, Antonio… estás listo?

FEatured Image: Screenshot of the two recent episodes of the PR Connection web site. I made the web site and the images are all cited/attributed in the post. It’s all open licensed stuff.

The many views of a humble map

The Great Beauty of Teaching