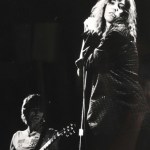 Here is one post sprung up when I searched Patti Smith on Instagram. She’s also a photographer, after all. And her music and work mean a lot to me. But this does not seem genuine. I think it’s the work of some fan, since there are almost no photos taken by her, and it’s mainly a collection of portraits of her. And no work of her as a photographer seems to appear there. Still, it’s a nice collection, worth seeing.

I was in Florence 1979 with a bunch of friends and my sister too. And we lived her first concert in Italy in full with a huge expectation–hey, I was twenty, and I would do it again! Took a short train ride from Rome and slept cramped like eight in one hotel room. Got to the stadium so early, as soon as the gates opened, and we found a good spot on the grass, where we spent the afternoon. Began in the evening with Gloria and ended with Twist and Shout. It still reverberates through my mind. I know, I’m using whatever excuse to post a video of Patti singing Gloria.

I did various searches for photos of that concert, but found only few available online. One is the featured image of this post. Another gives the idea of the people amassed at the stadium.

My own photos–I shot many–are probably at my mother’s, or unfortunately lost.

A Home for the Puerto Rico Connection Podcast

So, Is Algebra Necessary?